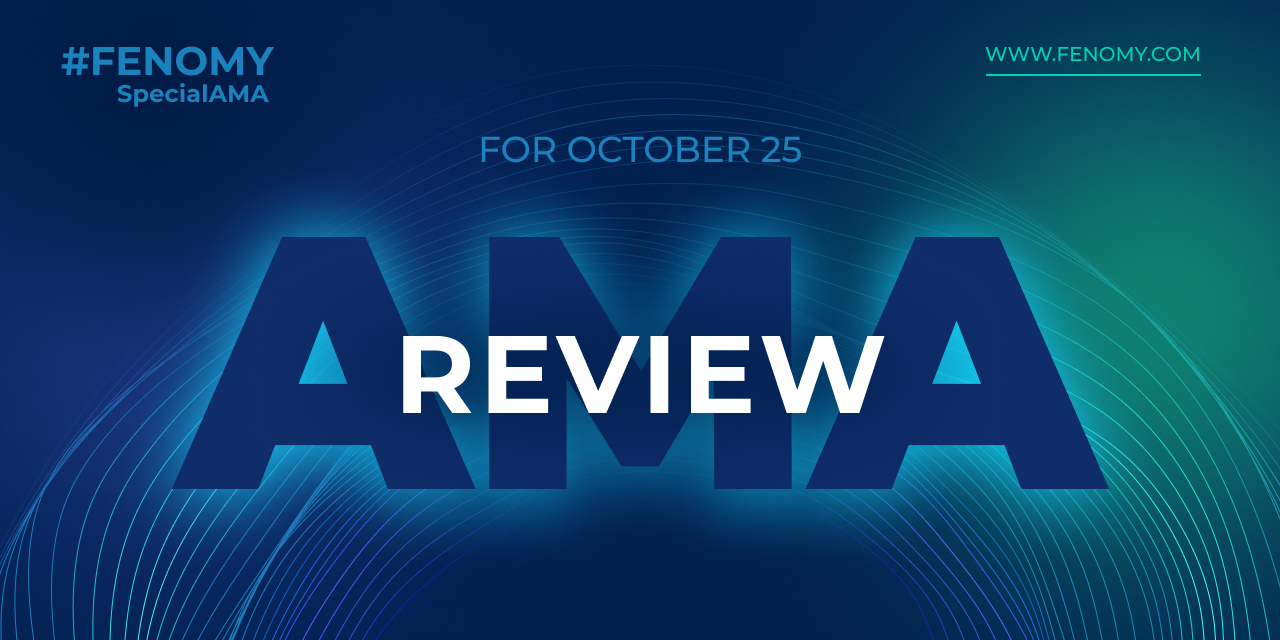 From October 17th to the 19th The Fenomy System team took part in the World Blockchain Summit in Dubai. The main events of the summit took place at the Atlantis hotel and others at the Burj Khalifa.

Fenomy System was presented at the summit in a couple of different ways:

- we had our own booth in the main pavilion where it was easy to talk to visitors and participants and answer questions.

- We took part in the pitch competition in the main conference hall of the Atlantis hotel where our presentation was heard by hundreds of people.

- attended the after party where we continued networking in a more informal setting.

During the summit we had more than 100 interesting encounters and conversations, many of which are ongoing. The main topic of most of these conversations was partnerships, investments, industry specific solutions and integration.

On a greater scale most of the people we talked to were rarely interested in tokens, market caps and other crypto related topics. People were more interested in the project itself, its perceptive and the special features of our system as well as the possibility of partnerships and mutual development.

Even though the summit lasted only 3 days it didn’t end for our team because we had meetings after it had finished. These meetings were important for the project. Although we can not disclose the nature of these meetings, they could be very important in the long run for the project and we will share more as soon as we are able to.

More than 50 organizations and projects were represented at the summit, those who had seats in the exhibition pavilion and a large number of those who were ordinary guests. Almost all the presented projects had their own ready-made solutions, interesting concepts, background.

The trend for NFTs is still strong. They were widely presented and piqued visitors’ interests. There were also metaverse based projects, game projects and aggregators.

It is worth noting that blockchain projects with solutions for real life were very well represented, including in the field of security. They will obviously become a future trend, which was noted by many participants with whom we spoke.

Among the participants there were also many representatives of investment organizations and private investors who carefully studied interesting projects for the purpose of investment. The project that we presented also gained a fair bit of attention.

It is also worth noting that the summit was held under the patronage of SHEIKH JUMA AHMED JUMA AL MAKTOUM, which determined a great interest of the UAE state structures, whose representatives were present at the summit.

It is too early to sum up the results as a whole, despite the fact that the summit is already over, but a lot of work on follow ups after the summit is just beginning. We can say with careful optimism that our team is very pleased with the summit, all the tasks set were completed and moreover, we think there will be positive news soon, which will certainly please our friends and partners.

Our website underwent a redesign. We also updated the white paper, the mobile app and the telegram bot. Soon we will once again update our system. The update will include Chinese and Arabic languages in our web app. Also we will have a form for working with algorithmic NFTs, etc. In addition, other work is underway that is directly related to improving management, increasing the sustainability of development, and developing relations with partners.

1. Could you share a bit about security and also what benefits you provide to stimulate users choosing your platform?

Safety and high reliability are embedded in the systems concept. We are working not only on the security of the system, but also on the safety of the system participants. Using Fenomy is possible without entering personal data. There is no need to enter emails and phone numbers and other data. The user only has a Fenomy id. Fenomy implements the principle of minimizing data transmission. Most of the packages during user activity are short instructions that start system algorithms, while the same instructions can run different algorithms. Naturally, all packets in the system are encrypted. And even if data is intercepted, then what the attacker will receive will be irrelevant information. In addition, direct contacts between participants are excluded in the system. The option that someone will take possession of someone else's data through communication is excluded.

More information you can find on our website and in the WP.

2. What makes Fenomy special from its competitors?

We do not have specialized industry solutions that can compete with other specialized industry solutions, we are an ecosystem, a constructor for creating such solutions. But the solutions created on the basis of Fenomy by our partners will probably be able to compete. Fenomy System does not compete with anyone, but on the contrary strives to become a useful tool for everyone. If we were to talk about similar systems that probably do exist, after all, there is a trend towards the development of security solutions in real life using blockchain, then this only benefits and increases the demand for such solutions.

3. What are your top priorities in 2022? Could you share some plans for the upcoming year? Which part of the project are you most focused on right now and what killer features of your project make it ahead of its competitors? Could you tell us 2-3 features of the project?

2022 is already ending, but many more are planned before the end of the year. The main work of course is on important components - blockchain (phase 3 of testing begins), incident control center and more. It will be great if you look at our roadmap on the site - everything is there by month. And the most important events will take place in 2023. The second part of the question we have already answered about competitors, about the features - this is undoubtedly anonymity, autonomy and trust algorithms.

4. Is the Fenomy mobile application already launched? If it is, then does it support only Android or both Android and IOS?

It is launched and already used by people, the mobile part of the blockchain and a number of tools are working. Everything in the system is in test mode, including the mobile application. So far only on Android, but iOS is also planned and coming in the near future.

5. Does the Fenomy team have intentions to participate in any socially significant projects aimed at helping people? For example, ensuring the security of any objects?

Yes, we do and we have already participated. We plan, of course, to increase participation as the system tools are ready and completed. It is the natural environment and mass events. And safety at the facilities is one of our priorities.

6. Apart from doing AMAs, what are the other marketing strategies used by Fenomy to make it globally popular? Are you planning to recruit moderators from different regions to translate your project to non English users?

The AMA is not a marketing tool, but a way to communicate with people, to answer questions. We do it in other ways as well. The development of the community and popularity around the world directly depends on the development process. We do not want the marketing to overpower the technical process. Everything is good in moderation. Now the community is growing naturally, people are registering in the system, helping with testing. To convey information about the system, we have the Ambassador program. We already have Chinese, Indonesian, Russian, Arabic groups. Next in line are German and French. Everything is going as planned.

7. Collaborations and partnerships are some of the most important cornerstones to help improve adoption. Can you tell us about your current partners, plans for partnerships and what everybody stands to gain from these partnerships?

It is true, the development of partnerships is very important. Our system is also created to help partners implement industry and private solutions. While we are in development, we are not striving to expand the partner network and now we are working with a few organizations in the field of security and volunteering. This helps us to significantly improve the system, and get unique tools to solve their problems. So, thanks to the partnerships, the system of the People's Dispatch appeared.

Of course, we are determined to develop partnerships and we have already held many discussions, including at the summit.

8. Why did you choose to name your project Fenomy?

Fenomy is a complex word made out of two: functional and economy.

9. Will it be possible in the future to bridge coins and Fenomy Blockchain to other coins and blockchains with similar technologies?

Yes, there will be bridges once the blockchain goes public not only to similar, but also to other ecosystems and centralized systems as well.

10. What is the project mission?

Our mission is creating an environment and tools for efficient and reliable use of horizontal connections in real life – for living people and devices as well. For solving various tasks – first of all security and safety management.